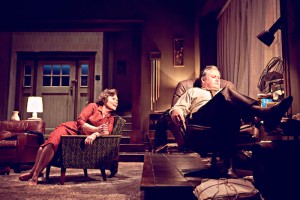 Much has been written about the snack ban instigated by this Edward Albee revival at the behest of its star, Imelda Staunton. No problems on that score: with performances of such scorching intensity sustained over a shattering three hours, audiences will be unwilling to release a breath, let alone distract with a rustling crisp packet.