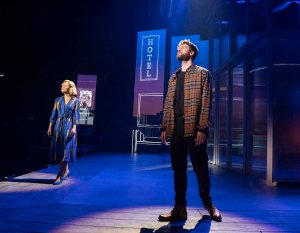 Originally due to premiere back in March, Sleepless – a musical version of the winning 1993 movie Sleepless in Seattle – now acts as a test case for the return of fully staged but socially distanced indoor theatre, AKA Stage 4 of the Government’s “roadmap”. Though a musical adaptation premiered in the States in 2013, this is billed as a new work, with a fresh book by Michael Burdette and score by Brits Robert Scott and Brendan Cull. Bravo to all involved for bringing audiences back safely and enthusiastically, even if the show itself, contrary to its title, is a tad more somnolent than might be hoped.