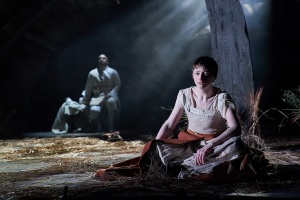 Changing the gender of the title character “highlights the way in which women still operate in a world designed by and for men,” argues Chris Bush, whose reimagining of Marlowe’s play premieres at the Lyric ahead of a UK tour. It’s certainly a compelling idea – albeit one already explored in previous productions like Pauline Randall’s 2018 gender-swapped Faustus at the Globe – but the resulting piece, though impassioned, is unfortunately rather a muddle.