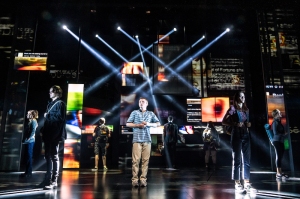 Steven Levenson, Benj Pasek and Justin Paul’s Tony and Grammy Award-winning musical Dear Evan Hansen is an institution in the States, running on Broadway since 2016 and currently on its second year of a national tour. It also made a star of original leading man Ben Platt, now appearing in Netflix’s The Politician – and this long-awaited West End production could well do the same for the exceedingly talented 21-year-old Sam Tutty.