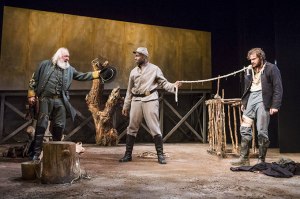 The current racial crisis in America might seem too urgent, too horrific, for us to be constantly seeking historical stories, but Suzan-Lori Parks’s play cycle makes a vividly articulate case for the long thread running from 19th-century slavery to 2016 debate over entrenched ethnic hierarchies and the nature of freedom. Originally staged at New York’s Public Theater in 2014, Jo Bonney’s acclaimed production now makes a welcome visit to the Court, where this intimate epic unspools unhurriedly and mesmerisingly.