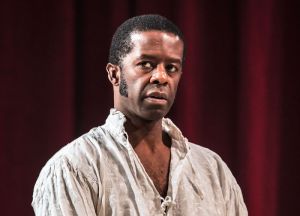 Lolita Chakrabarti’s impassioned debut has only gained topicality since its 2012 Tricycle incarnation. Trevor Nunn’s all-white Wars of the Roses and #OscarsSoWhite, among others, have fanned its flames, while quips about a paranoid Russian regime and the limits of English openness to change seem all too pertinent. Cameron might well borrow the woolly idea of “new based on the old” during the European referendum debate.