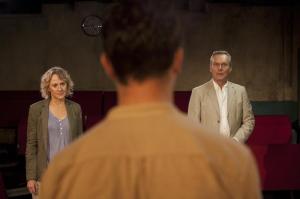 There’s nothing like a death to bring a family together. In Simon’s case, that death is his own – impending execution by firing squad in an unnamed Asian country, unless he can win a reprieve from the Prime Minister, President or Pope, “one of the Ps”. Confined space, buried secrets, and a race against the clock: on his stage debut, filmmaker Paul Andrew Williams is determined to make his audience sweat.