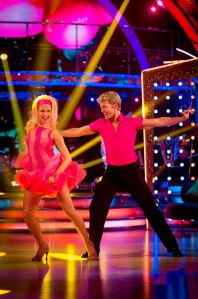 We love a good Strictly scandal. In a year sadly devoid of both romantic chemistry between partners (no CURSE OF STRICTLY break-ups on the horizon) and genuine drama, the producers finally managed to manufacture some of the latter in an otherwise lacklustre show – although perhaps not in the way they intended.

Or maybe this was the master plan? The only thing we love more than a scandal is a good conspiracy theory, and this week inspired more than JFK, Roswell and the moon landings combined.

Was this year’s fix-a-thon, the woefully camera-unfriendly waltz-a-thon, an attempt to boost the celeb girls, safely led by their partners? If so, was the lack of votes for Pixie a backlash against perceived bias? Did the three-way leaderboard tie scupper voting patterns – and if so, was that intentional? Did the tour casting have any influence on the judges’ decision, and on Len directing his random rant at Pixie? (Simon’s touring, Pixie is not.)