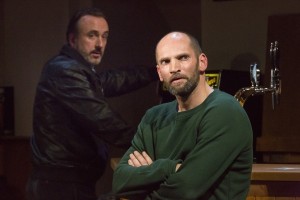 Owen McCafferty’s spellbinding study of violence, truth and forgiveness has gained extra resonance since its 2012 premiere at Dublin’s Abbey Theatre.

In fact, its appearance at the Soho seems almost eerily appropriate, coming as it does in the wake of Gerry Adams’ arrest, renewed discussion about “the disappeared” and the long shadows of the Irish Troubles, and a growing tide of intolerance suggested by the recent (frankly alarming) European election results.

Quietly also reaches back to football World Cup fever, with the 2009 Poland versus Northern Ireland qualifier playing on a television in the background. Polish bartender Robert and gruff local Jimmy half watch while needling one another with easy familiarity, expressing national loyalty even though Jimmy professes indifference at the outcome, and Robert has a complex relationship with his homeland.