A womb of one’s own 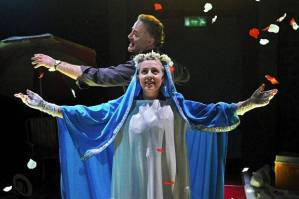 It’s not often you find yourself sympathising with both Communist and Nazi social policy, but that’s the unusual position one might be forced to take when viewing the compelling A Time to Reap at the Royal Court.

Most recently, the anti-abortion lobby proposed a bill removing the three legal exceptions (when the woman’s life or health is endangered by the pregnancy; when the pregnancy is a result of a criminal act; when the foetus is seriously malformed) and, although defeated, it had an astonishing show of support, with 60 MPs voting in favour.

During the recent American election debates, us Europeans might have begun to feel a certain superiority over our Yank cousins, whose leading right-wing party entertains social and gender attitudes better suited to the 1950s. Yet, as A Time to Reap illustrates vividly, the adoption of old-fashioned political stances via faith is taking place right on our doorstep.

It may be hard for a largely secular British audience to really understand the pervasiveness of religion demonstrated here. All three of Wakulik’s characters are liberal, independent thinkers, contemporary in their outlook and able to view Catholicism with a degree of detachment. One even treats religious fervour as a joke, albeit one that provides major business by making him Warsaw’s unofficial abortion king.

And yet, like Brideshead Revisited and The End of the Affair before it, the play depicts the agony of seemingly free-spirited people who cannot shake off the yoke of Catholicism. This has a tragically corrosive effect on a web of relationships – two love affairs, a friendship, father and son – and complicates ethical and moral certainties, leaving all three characters scrabbling for safe ground.

There is also a fascinating meditation on the clash between modernity and tradition, with Max Bennett excelling as the chilling charmer, revelling in London’s hedonism before reclaiming angry piousness and lashing out at his father (a nuanced Owen Teale) and their shared lover (likeable Sinead Matthews) with confused cruelty and childlike fear.

The play splits between evocative narration and bursts of interaction, but could have done with more of the latter; we are told about several key relationship developments and plot points after the event, rather than allowed to observe them for ourselves. A couple of jarring attempts at stylistic experimentation also feel unnecessary.

However, this is a strong, focussed piece with an effective emotional undertow and important social concerns, which made for compelling viewing on – appropriately enough – International Women’s Day.